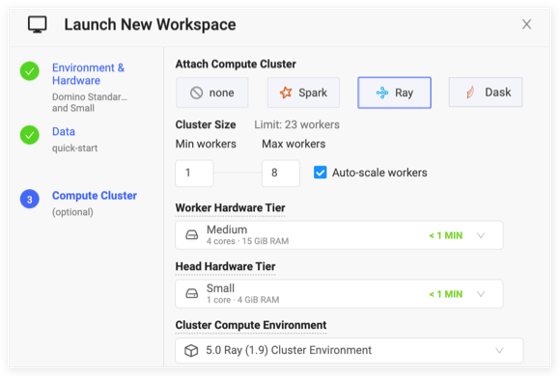 By Alireza Mounesisohi, Field Engineer at Domino, and Lakshmi Narayanan, Solution Architect at Domino, on February 9, 2022, in Product Updates One of the most common use cases of autoscaling in Domino is when users have different machine learning workloads and need different compute resources. With the benefit of Kubernetes, users can have different node pools, each containing different types of instances. Domino takes advantage of the capabilities of Kubernetes to autoscale compute nodes so they are only live when in use.

For scaling out, Domino constantly looks for unavailable resources at a given frequency. If no resources are available, Domino scales up the number of nodes to accommodate the resource request.

To illustrate, in Figure 1 below, the non-GPU workspaces created within Domino will run on the node pool “default”. Note that the instances listed here are of type “m5.2xlarge” and the node pools are only “default” and “platform”.

Figure 1: Domino Dashboard of Nodes in Use

Nodes that have the same value for the “dominodatalab.com/node-pool” Kubernetes node label form a Node Pool. Executions with a matching value in the Node Pool field will then run on these nodes. Domino relies on the labeling of the nodes in the underlying node pools associated with the Kubernetes cluster to scale compute nodes. Additionally, Hardware Tiers control the underlying machine type on which a Domino execution will run. Figure 2: Creating a new workspace with the GPU Hardware tier

Creating this workspace will trigger a scale up of the GPU compute node from 0  -> 1. (Figure 3) Figure 3: The cluster autoscaler will trigger a scale-up of the GPU node from 0 -> 1

Once the cluster autoscaler scales up the new node and it’s attached to the Kubernetes cluster (Figure 4), the workspace pod gets scheduled to the new node

Figure 4: The new node listed under the Infrastructure section of Domino

The cluster autoscaler keeps track of resource requests on a node. If a node is not utilized for 10 minutes (configurable), it will be terminated.

A node is deemed to be unneeded if all of the following conditions are met:

As a result, Domino efficiently balances the number of resources with the demand at any given time.

In addition to autoscaling of the compute nodes using cluster autoscaler, Domino 5.0 has the capability to autoscale Spark, Ray, and Dask on-demand clusters. This is will enable the data scientist to begin with a small cluster and scale as needed based on the fluctuating demands of the job.

Domino leverages the horizontal pod autoscaling capabilities provided by Kubernetes and supports distributed cluster autoscaling for Spark, Ray, and Dask clusters. When the average CPU/memory utilization across all workers exceeds 80 percent (or the target set by an administrator) a scale-up operation is triggered up to the maximum worker count configured for the cluster. When the average utilization falls below the target, a scale down is triggered.

A user can set up a cluster with auto-scaling distributed compute with just a few clicks.  As shown in Figure 5, Domino will spin up a cluster with three Dask workers and if the average CPU/memory utilization exceeds the configured value, the number of workers will be scaled up to a maximum of five workers.

Domino will keep adding workers until the max worker limit is reached.  Figure  6 shows an example where a cluster started with one worker and scaled up to five workers as the resource utilization thresholds were exceeded.

Figure 6: Example of Scaling Up Resources on a Spark Cluster

Access to scalable compute infrastructure is critical for data scientists to do what they do best. Domino empowers data scientists by taking care of the underlying computing needs, using Kubernetes to scale the distributed compute cluster. In addition, IT teams managing the infrastructure can rest easy knowing that the Kubernetes Cluster Autoscaler will only spin up nodes when necessary, saving the organization from wasting money on underutilized resources.

A critical component of increasing model velocity is streamlining the utilization of clusters. Domino automatically scales compute clusters based on the workload to simplify provisioning, optimize utilization, and manage computing costs so you can maximize the productivity of your teams and of the return on your computing investments. By Bob Laurent, Sr. Director of Product Marketing at Domino on September 16, 2021 in Product...

What if you wanted to do something really ambitious in data science–something like designing an...