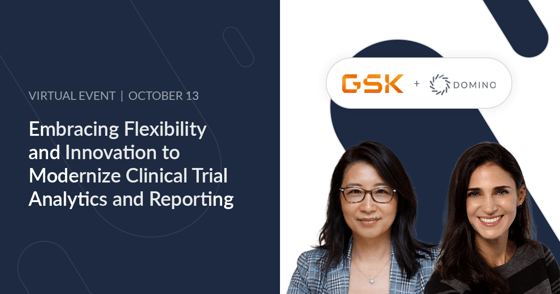 In a never-ending quest to accelerate innovation, healthcare and pharmaceutical companies around the world have been working to modernize their statistical computing environments, streamline clinical trials, and handle the required analytics and reporting.

Our recent webinar with GSK explored how the pharmaceutical giant recently undertook such a modernization, and clearly, the hundreds of attendees on the call were extremely engaged with the GSK story. Many attendees asked a number of insightful questions and here are just a few, including our responses. And if you missed the live session, check out the recording.

Q: You mentioned Domino is used in GxP and non-GxP environments. How does this work, and is the workflow for traceability built into Domino?

A: A Domino environment is a container image that includes the software to develop and execute code, e.g., the R packages you need in an analysis. For a more stringent GxP environment, the software included has undergone validation and been deemed fit-for-purpose to be used for GxP activities, such as clinical trial analysis & reporting. For example, if you are using a Domino project for a clinical study, you can have a validated R environment and a SAS environment, where you could use both within your study. Another group could be using a Domino project for exploratory purposes, or to actually do the validation of a specific R package, in which case that project would include the ability to use non-GxP environments in addition.  An administrator can restrict the use of certain environments. For example, clinical programmers can be restricted to use only the validated R environment and the SAS environment, whereas another group that requires the flexibility could have access to use both validated environments as well as non-validated environments.

Q: How do you move from an exploratory, non-GxP environment to a GxP one? For example, you start building your Ext Control Arm on non-GxP, then want to move to GxP to submit it for authorities.

A: Domino's audit trail, traceability, and reproducibility capabilities required for GxP work are always included in every project, whether for a GxP or non-GxP processes. You have both the flexibility and GxP controls built-in without compromising on either in Domino. The key consideration before making the change is whether you have validated your standard tools and packages to be used in a GxP environment.

Q: How did you validate the system from a GxP perspective, how much effort is needed to manage changes and keep the system in a validated state?

A: Our recent work at GSK to qualify and validate Domino for SCE (GxP work) is a good example. We produced a validation plan that includes the approach and a list of documents that will be produced. Whenever a change is made to the system, we execute the validation process again, updating the existing documents where applicable and producing new ones where required. As such, the effort is greater in the initial validation of the system, compared to ongoing changes.

Q: Is the audit trail surfaced to users and used for quality assurance?

A: Every project has an audit trail of activity throughout. The activity is readily available at any time to understand the timeline of events. Domino provides a data access management audit trail in PDF format, as well as an API to retrieve the audit trail for all job executions that have occurred within a project. Domino automatically versions the data, code, and outputs created, and can create a .CSV audit report for evidence of review or to show an auditor.

Q: How is the security of data controlled? How do you handle the blinding of some data, or analyses?

Access is managed on both the Domino project level, as well as on the Domino dataset level (in Domino 5.4 or later). Access levels can be no-access, read-only access, or read-write access. All access changes are audit trailed. Unblinding a dataset that contains sensitive data requires simply changing the access level of individuals or teams to that data.  No moving or porting of that data or the code which needs to be executed on it is required.

Q: What CDR is used, or does Domino serve as the CDR?

A: Domino is not a clinical data repository, but it can serve as the system of record for the data and outputs created in Domino by executing code. Domino can connect to a variety of data sources, including a CDR which holds the raw data, if it is API enabled, and direct access is possible. Domino can allow you to use data from a CDR as an input to generate analysis data and outputs, or perform other tasks, such as modeling or monitoring. Domino also allows you to connect programmatically to your MDR, whether it be centrally managed Excel spreadsheets, a database, or an MDR system accessible via API, in order to utilize metadata to generate outputs using your standard or non-standard code.

How to Modernize Your Own Organization's SCE to Accelerate Innovation

As this webinar makes clear, the right SCE can make a world of difference in how pharmaceutical companies can accelerate clinical trial submissions. You can watch a replay here. Then, learn more about how Domino helps GSK and other healthcare and life sciences companies modernize their SCE.

Caroline Phares is the Global Head of Health and Life Sciences at Domino Data Lab. Before coming to Domino, she served as Product Director, Quantitative Decision Making at GSK.

A Note to Customers: Domino Business Continuity in Light of COVID-19

This was a communication we sent out to Domino Admins earlier today to address some customers’...

What’s the Pharmaverse, and How Do Data Science Innovators Use It to Streamline Drug Approvals?

When it comes to the pharmaceutical industries, machine learning, AI, and statistical computing...