Investing to Make Every Company Model-Driven 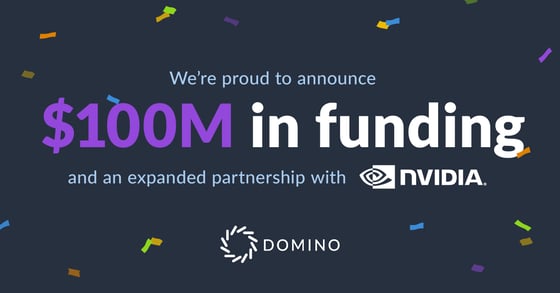 I’m thrilled to announce that Domino has raised $100 Million in funding led by Great Hill Partners, existing investors Coatue Management, Highland Capital Partners and Sequoia Capital, plus another new investor: NVIDIA. The funding will let us accelerate growth across the company, especially in product development, so we can continue to build the world’s best Enterprise MLOps platform.

As one example, with this funding Domino plans to strengthen its integrations with NVIDIA: establishing a team dedicated to supporting our customers as they build competitive advantage with NVIDIA accelerated computing solutions. This investment will also help us continue hiring the best talent to support our customers as they put models at the heart of their business.

What really excites me about this investment is the ability it gives Domino to help thousands of companies tackle two very distinct things happening in business right now.

First, more enterprises than ever are transforming their business to be model-driven. To date, more than one in five Fortune 100 companies use Domino as the platform for managing model-driven activities, and over the past two years, we’ve doubled the number of Global 2000 companies we help. These enterprises are weaving data science into all aspects of their businesses. Ford Motor Company and Lockheed Martin are great examples. Using data science, they’re doing cutting-edge stuff like building self-driving cars and AI pilot software. And they’re also doing tons of stuff behind the scenes to improve customer experience and operational efficiency.

Becoming model-driven is also about the types of problems you can solve. Our deep integrations with NVIDIA have enabled many of these companies to use accelerated computing and AI-optimized software as a competitive advantage for building increasingly sophisticated models. We see this in everything from natural language processing for predictive supply chains to predictive maintenance for energy infrastructure. Further deepening our partnership with NVIDIA democratizes self-service GPU access with enhanced IT governance, offering collaborative, reproducible model development and training — free of DevOps or infrastructure constraints.

Second, transforming in this way requires dramatically scaling your data science team, and many companies are getting stuck here because they can’t hire enough data scientists. Just look at the numbers. According to a study we commissioned of enterprise data executives, data execs’ most common concern about scaling data science is this: 44% say they simply haven’t hired enough. But those they have hired are also being used inefficiently. More than 2 in 5 data execs responded that their data science resources are too siloed off to build effective models. More than 2 in 3 data execs (68%) report it’s at least somewhat difficult to get models into production to impact business decisions—and 37% say it’s very to extremely difficult.

These projects are so difficult to get off the ground because of the lack of collaboration among data scientists and the lack of software infrastructure to support the effort.

At Lockheed Martin for example, prior to using Domino, 65% of their data scientists' time was being spent on engineering and admin instead of model development, where their real value is. Collaborating with Domino helped maximize the productivity and output of Lockheed Martin’s data science teams. As they told The Wall Street Journal, Domino makes its data scientists perhaps 20% to 25% more productive, which is adding up to thousands of hours in time savings — and rightly so. Data scientists shouldn’t be spending their time on engineering headaches; they should be spending their time doing what they do best: building models.

Many of our clients have succeeded by growing their data science population through up-skilling less technical analysts and using technology to make it easier for their data science practitioners to be more productive and effective. With Domino, these companies have rapidly added hundreds of productive data scientists to teams that are producing incredibly complex models to solve the world’s most important problems.

Businesses that run on models perform better, and that’s the transformation every business is going to have to make this decade from digital to model-driven. With NVIDIA’s accelerated computing platform and Domino’s Enterprise MLOps all deeply integrated, every enterprise has the ideal platform to drive this transformation at their fingertips.

We’re excited to announce that Sequoia Capital and Coatue Management have led a $40 million funding...

Today we’re announcing that we have raised $10.5 million in a funding round led by Sequoia Capital.

By Karina Babcock and Dan Ganancial on March 08, 2018 in Product Updates