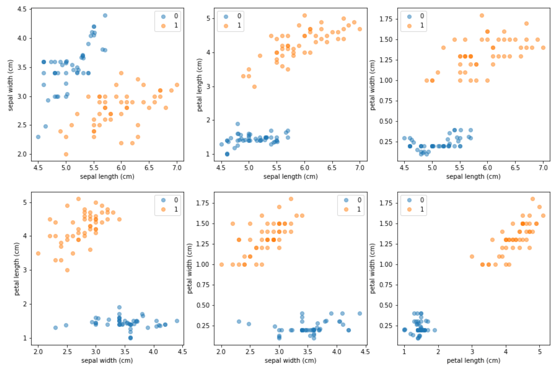 In this article we discuss why fitting models on imbalanced datasets is problematic, and how class imbalance is typically addressed. We present the inner workings of the SMOTE algorithm and show a simple "from scratch" implementation of SMOTE. We use an artificially constructed imbalance dataset (based on Iris) to generate synthetic observations via our SMOTE implementation, and discuss modifications that help SMOTE handle categorical attributes. Dataset and code are available here.

Machine Learning algorithms often need to handle highly-imbalanced datasets. When we say that a classification dataset is imbalanced, we usually mean that the different classes included in the dataset are not evenly represented. For example, a fraud detection dataset can often have a ratio of 100:1, as the number of fraudulent transactions is relatively small compared to the number of legitimate payments. Even higher skewness has been observed in other domains. For example, high-energy physics classification problems can feature a 100,000:1 background to signal ratio (Clearwater and Stern, 1991). Identical challenges are encountered in protein classification, where the number of proteins in one class is often much smaller than that of the proteins outside the class (Zhao et al., 2008). Further, imbalanced data exacerbates problems arising from the curse of dimensionality often found in such biological data.

Working with highly imbalanced data can be problematic in several aspects:

It must be noted that the traditional techniques used in over-sampling typically rely on simple sampling with replacement. In their 2002 paper Chawla et al. propose a different strategy where the minority class is over-sampled by generating synthetic examples. They demonstrate that the combination of this Synthetic Minority Over-sampling Technique (SMOTE) and majority under-sampling produces significantly better classifier performance.

Here is a simplified version of the SMOTE algorithm:

The algorithm accepts three required arguments — a list of minority observations (M, a Numpy array), amount of over-sampling required (N), and number of nearest neighbours to consider (k). Note that the value of N is interpreted as percentages, hence an oversampling of N = 100 will produce a number of synthetic observations that matches the number of observations in M. N = 200 produces twice the number of observations in M and so on. Note that the original algorithm does not prescribe a specific routine for selecting the nearest neighbours. Here we use Euclidean-based kNN, but this is not a hard requirement.

Let’s examine a random imbalanced sample of the Iris dataset (Figure 2), where only two target classes are considered. The minority class contains only 6 observations, but we can up-sample it using SMOTE and get a completely balanced dataset where classes 0 and 1 contain an identical number of samples. Figure 3 shows visual explanation of how SMOTE generates synthetic observations in this case.

The algorithm iterates over each observation in the minority class. Once a minority observation is selected, SMOTE identifies its k nearest neighbours, and selects a set of neighbours at random that will be used in the generation process. Note, that the number of used neighbours depends on the amount of over-sampling required. For example, if k = 3 and N = 100, only one randomly selected neighbour will be needed. If N = 200, two random neighbours will be selected. In the case where ⌊N/100⌋ > k, SMOTE will sample the set of neighbours with replacement, so the same neighbour will be used multiple times.

After the neighbours have been selected, the algorithm takes the difference between the feature vector of the minority member and the individual neighbours. Each difference is then multiplied by a random number in (0, 1) and added back to the feature vector. This constructs synthetic observations in the direction of each member, which are located at a random distance from the minority member. Note, that because of the random nature of the distance calculation, repeated iterations using the same minority member – nearest neighbour combination, still produces different synthetic observations (see Figure 4).

Figure 5 demonstrates the results from running SMOTE against the minority class with k = 5 and values of N set to 100 and 600. Inspecting the plot reveals that all synthetic observations lie along a line connecting two minority samples. This is a very recognisable characteristic of SMOTE-based up-sampling. Additionally, the intuition behind why up-sampling provides an advantage can be explained by the fact that more observations in the minority class lead to a broader decision boundary. Learning wider regions improves the generalisation of the classifier, as the region of the minority class is not so tightly constrained by the observations in the majority.
Chawla et al., (2002) have performed a comprehensive evaluation of the impact of SMOTE- based up-sampling. They demonstrate that combining minority up-sampling with majority down-sampling produces the best results. Their tests are performed using C4.5-generated decision trees (Quinlan, 1993) fitted against ten different imbalanced datasets (e.g. Pima Indian Diabetes (Smith et al., 1988), E-state data (Hall et al., 1991), the Oil dataset (Kubat et al., 1998) and others). The performance of the C4.5, SMOTE up-sampling, and majority down-sampling combination is evaluated against two other classifiers. The first is a Naïve Bayes classifier, with the priors adjusted to correct for the class imbalance. The second is a RIPPER2-fitted rule-based classifier, which is also well suited for datasets with an imbalanced class distribution.

The results demonstrate that the SMOTE-C4.5 combination consistently outperforms the two other classifiers — the SMOTE-C4.5 classifier does not perform the best only in 4 out of the 48 experiments that were conducted. Chawla et al., (2002) also explain why a simple over-sampling with replacement performs worse when compared to SMOTE-based up-sampling — simple replication of the minority observations leads to shrinking decision regions, which is the opposite of what is needed for good generalisation. Synthetic up-sampling, on the other hand, expands the decision regions, which improves the classifier performance.

One limitation of SMOTE is that it cannot handle datasets that are exclusively comprised of categorical features. There is a modification of the algorithm called Synthetic Minority Over- sampling Technique-Nominal Continuous (SMOTE-NE), which can handle samples that have a mixture of continuous and categorical features. In addition to vanilla SMOTE, SMOTE-NE also performs the following:

Chawla et al., (2002) provide an example that illustrates the modifications.

with a single correction for the \(C \rightarrow K\) change.

A word of caution. Chawla et al. (2002) do not present a rigorous mathematical treatment for this modification, and the suggested median correction appears to be purely empirical-driven. This carries the risk of this modification performing worse than simpler approaches like majority under-sampling. Indeed, in the original paper Chawla et al. note that this variant “performs worse than plain under-sampling based on AUC” when tested on the Adult dataset (Dua & Graff, 2017).

Another modification of SMOTE, called SMOTE-N (for Nominal features), tries to circumvent the SMOTE-NE limitation that the dataset cannot consist of categorical features alone. The SMOTE-N variant uses a modified version of the Value Distance Metric (VDM), which was suggested by Cost and Salzberg (1993) for nearest neighbour algorithms operating in symbolic domains (i.e. the features are no longer numeric, but real-valued distances between observations are still needed). For a dataset where all features are categorical, VDM computes the distance between two corresponding feature values \(v1\) and \(v2\) as

Example 2: Suppose \(\mathcal{D}\) is a binary classification dataset consisting of the following three
observations and their corresponding classes

After selecting the relevant \(k\) nearest neighbours via VDM, SMOTE-N creates new observations by simply taking a majority vote based on the neighbours to get values for the synthetic feature vector. Keep in mind that the original paper does not provide any performance comparison for SMOTE-N, so using it as a "go-to" technique without looking into alternative approaches and assessing their performance is not recommended. In addition, the original description of SMOTE-N does not discuss tie breaking in the voting process, however, a simple heuristic would be to randomly pick one of the tied options.

In this blog post we talked about why working with imbalanced datasets is typically problematic, and covered the internals of SMOTE - a go-to technique for up-sampling minority classes. We also discussed two modifications of SMOTE, namely SMOTE-NE and SMOTE-N, which target datasets with categorical features.

The dataset and code used in this blog post are available at https://try.dominodatalab.com and all results shown here are fully reproducible, thanks to the Domino reproducibility engine, which is part of the Domino Enterprise MLOps platform.  If you would like to try the project yourself you can register for a free account by clicking on the link above.

Sampling Based Methods for Class Imbalance in Datasets

Imagine you are a medical professional who is training a classifier to detect whether an individual...