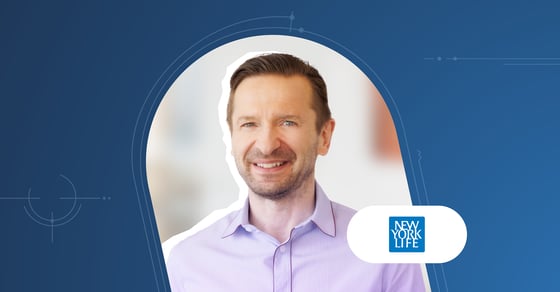 How do you build a data science capability into a powerful force for making decisions about virtually all facets of your business? And how do you recruit, train, organize, and retrain members of your team, in a field where competition for talent is intense and growing? These are just a couple of the questions that Glenn Hofmann, chief analytics officer at New York Life Insurance Company, has confronted and mastered in his tenure there.

Within a span of five years, Glenn Hofmann founded and built a successful, at-scale data science organization within New York Life, a Fortune 100 company that is America’s largest mutual life insurer. New York Life’s Center for Data Science and Artificial Intelligence (CDSAi) is fully immersed in the core of the company’s business. The CDSAi’s breadth of statistical and machine learning expertise has helped New York Life to make real-time, model-based decisions across the company, so New York Life can meet new challenges even in times of great uncertainty, such as the COVID-19 pandemic.

New Ebook Interviews with Hofmann and Other Top Innovators

Domino recently spoke with Hofmann for our new ebook, The Data Science Innovator’s Playbook, which covers the rise of data science in fueling innovation, through interviews with seven top data science innovators chosen by their peers at Rev 3 in May.

All of these innovators are tackling some of the world’s toughest problems, many of which—such as COVID and—present particularly difficult challenges to the insurance and finance industries. But, says Hofmann, new tools are strengthening data science, so the rising discipline is increasingly able to handle whatever challenges the world throws at it, and New York Life continues to thrive.

“The algorithms have gotten better, and both the infrastructure and software to deploy models into production have also vastly improved,” says Hofmann. “That drives the impact our models can have on the business.”

“For example, at New York Life, we have both an on-prem and cloud-based computing environment that is used for all aspects of the data science lifecycle,” he says. “That includes Domino, which enables flexible real-time deployment of models in any of the popular programming languages, along with monitoring and reporting of our models in production.”

In the new ebook, Hofmann explains some of his techniques for making New York Life the kind of place where many data scientists want to make their careers. In his Innovator interview, you’ll discover:

Download the The Data Science Innovator’s Playbook to read more of Glenn’s observations, as well as many other themes, strategies, tactics and insights from:

The ebook is free, but you need to register here. You can also see more about what’s included in the twenty-six-page ebook here.

What if machine learning and data scattered around the world held the keys to the cures for a...

If you’re working in data science and are feeling like making a job change, here are some things...