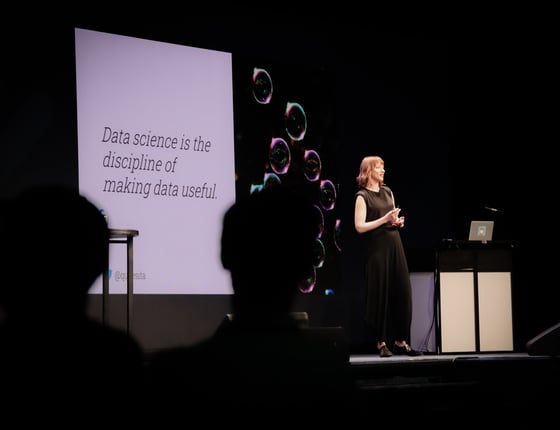 "The data science universe is expanding,” Google’s Chief Decision Scientist Cassie Kozyrkov told an audience of more than 700, composed mostly of data scientists, data science leaders and IT directors, on the second day of the Rev 3 conference on data science and its world-changing impact around the globe. And the very presence of so many attendees–total conference registrations were pushing 1,000 on the final morning of the event–bore testament that the profession is growing in size, power, and prestige.

So was the list of rockstar keynoters, who advised the attendees on everything from career development and advancement, to developing models with less noise and bias, to IT-data science collaboration in pharma and other industries, to how to make consistent improvements that over time add up to seismic changes. And the audience clearly loved it, mobbing the after-speech sessions with speakers to hear more.

Kozyrkov told an enthusiastic audience that the ascendency and recent success of data scientists has led to an explosion in what is expected of them.

“A lot of data scientists have imposter syndrome because they can’t do the whole task themselves,” she says.

But, Kozyrkov said, a positive sign that companies are betting on their data science teams is the emergence of tools specifically designed to help them get the MLOps resources they need to do their jobs. She drew an analogy between the growth of Olympic swimming pool manufacturers, who originally thought that the same pool that worked for recreational swimming could also serve champions. Over time, as it became clear that competitive swimmers were growing in number and importance, the Olympic swimming pool was defined and marketed.

Similarly, says Kozyrkov, the original tools that data scientists had for such things as provisioning resources and detecting model decay, were fairly primitive and difficult to use, because they’d been designed for other technical professions, not for data scientists and their leaders, or even for IT pros trying to suppose them..

But as data science has become increasingly valued, companies such as Domino Data Lab are investing in tools to support the young profession.

“Our Rev 3 host, Domino Data Lab, has made tools for data scientists that are incredible, quite usable, and really lovable,” she told the audience. “That’s what advocacy for our data science community looks like."

With greater power comes increased responsibility, and Cass Sunstein, Harvard professor and New York Times best-selling author of The World According to Star Wars and Nudge, urged the audience to beware two problems that could potentially derail their models: bias and noise.

“Bias is a source of error, and noise is its quieter, younger sibling,” he said. “Noise leads to unfairness, discrediting organizations, and costs, costs, costs,” he warned.

In healthcare, for example, Sunstein noise and bias can lead to testing people who don’t need to be tested for a condition such as heart disease, and failing to test people who should be tested, potentially leading to negative health impacts.

Furthermore, says Sunstein, the exposure when AI and ML models go bad can lead to increased fear of all ML and AI-enhanced models.

Sunstein advises breaking down models and decision-making into smaller pieces to improve results.

“Super-predictors [people and models that are highly accurate in their predictions] disaggregate decisions into component parts,” Sunstein says.

And while Sunstein’s talk focused on the ways that models can go wrong–with suggestions for model mitigation measures–he was very optimistic overall that in the next few years, data science practitioners can advance humanity’s best interests more than ever before.

“In the last 100 years we’ve had opportunities to cut bias and noise in a way that lengthens lives and improves health and wellbeing. But we haven’t seen anything yet,” Sunstein concluded.

The future of the profession looks bright in other ways, as well, with speakers throughout the event mentioning the meteoric increase in demand in the last three years.

“There are so many more opportunities in data science now. Companies are betting on data science to drive decisions,” Johnson & Johnson’s CIO, Jim Swanson, told the audience.

Swanson also acknowledged that the resulting increased demand for professionals has made it a hot labor market, with companies competing intensely for talent. Referring to Kozyrkov’s earlier talk, he mentioned that intangibles–such as the desire to join the mission of the fight against disease and the advancement of human health–are often the deciding factor.

“I can’t pay what Cassie can [at Google], but I can compete on mission,” he told the crowd, a reference to the company’s position as a pharma and healthcare leader.

Swanson also says that going forward, there’s a need for data scientists who have a broader range of skills.

And when it comes to promoting data science within their organizations, the important thing is to understand which metrics the company cares most about, and mobilize data science efforts to support those goals.

"If they care about net present value (NPV) of pipeline, we ask about everything, ‘Are we tying our data science to that,’” he said.

"When they see results that are important to measures they care about, we get extraordinary uplift,” says Swanson, and resources and recognition flow more freely. And that benefits both data scientists and the profession in general.

Finally, the conference ended with a data-driven inspirational talk by James Clear, NYT best-selling author of Atomic Habits. Consider, he said, the impact on the performance–of any team or individual–of making an improvement of 1% on a number of relevant metrics, which works out to a 37-fold improvement. Next, compare that to doing something 1% worse for the same amount of time; at the end of a year, performance is near zero.

The trick, says Clear, is to build rituals that feed into small improvements, and reward yourself for sticking to them. From winning sports teams to successful businesses, Clear says the winners are those who can sustain many small improvements with the force of habit.

If you’re working in data science and are feeling like making a job change, here are some things...