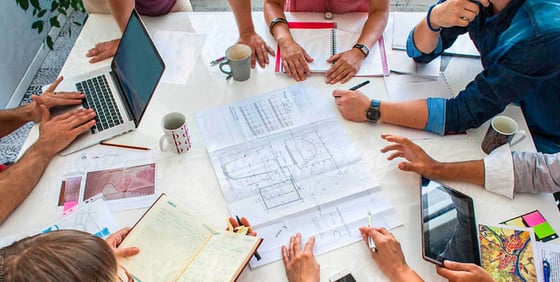 It's common knowledge these days that culture is critical to a company's success, and there's no shortage of advice about defining and nurturing the culture at one's startup. This post is an articulation of a key characteristic of the culture we want to engender at Domino: being direct with criticism while striving to make that criticism genuinely constructive.

“If you don’t have anything nice to say about someone, don’t say anything at all” is a common maxim that teachers and parents drill into their children, and unfortunately, that precept governs far too many workplace interactions (at least the open, face-to-face interactions). The problem is that the word “nice” is superficial: whether a comment is “nice” depends entirely on the words one uses, regardless of the effect, outcome, or intention of the speaker.

But as most high-performance organizations will attest, “critical” or “negative” feedback is an essential necessary tool for driving improvement. It’s easy to say that “the new website looks bad” is not a “nice” comment — but if my motivation in making that comment is to call attention to design issues that will negatively affect the company’s image, then it would be highly irrational to withhold that feedback. I would argue that organizations needs to embrace criticism, and constantly identify areas that need improvement, if they wants to excel.

The company I worked at before starting Domino is well known for a culture of directness that embraced criticism to an extreme degree. One potential problem with a culture that encourages criticism is that it can lead to feedback that is critical for the sake of being critical — in essence, abuse.

Over the course of building Domino, I have grappled with how to balance these two unsustainable extremes: on the one hand, we need criticism to drive improvement; on the other hand, a myopic emphasis on criticism as its own end will be just as damaging to our progress as no criticism at all.

An intent to be helpful

Here is the principle I use to reconcile the tension above; it's the standard I hold myself to, and one of the defining characteristics of our culture at Domino:

When providing feedback, check your intentions, and make sure you are trying to be helpful or constructive.

By “helpful or constructive” I simply mean: is your comment likely to make someone better off, or to improve some situation? What new state will the world be in as a result of your comment, and is that better than the current state of the world?

By “intention,” I mean what are you honestly trying to accomplish with your comment? This is related to being helpful and constructive, of course: it’s not enough to say something good might happen, maybe, in some low probability scenario, if your genuine motivation is actually to make someone feel bad.

The "intention" condition also helps avoid a similar case of question-begging that the original maxim suffers from (what does it mean to be "nice"?). We don't need to worry about what it means to make the world "good" or "better" — only that, in your subjective interpretation, your genuine motivation is to effect such a change.

Sometimes well-intentioned comments will cause short-term suffering. For example, it may hurt to hear from your manager that you don’t seem to have the abilities required to do the task you’ve been given; or to hear from your coach that you’ve been cut from the team because your skills aren’t good enough. But unless your manager or your coach is a sadist, chances are they are telling you because you (and others) will likely be better in the long run as a result or acknowledging the reality. “That will hurt his feelings” is not a sufficient reason to withhold a comment, as long as your intention is to be helpful or constructive. Sometimes the truth hurts — that doesn’t mean we should ignore it.

People are masters of rationalization and self-deception, so it’s important to introspect, mindfully about your intentions when sharing “critical” or “negative” comments. Ask yourself, “What is my goal with the comment I am about to make? Will anyone be better off because of it?” If not, why are you saying it?

If you’re a manager, and you’re giving some critical feedback to one of your reports, are you genuinely trying to help your report (and being mindful of your tone and the content of your feedback, toward that end)? Or are you more interested in establishing your own superiority or intelligence? Being mindful of your intentions can help you clarify and phrase your feedback in a way that creates the most positive impact.

Personally, I strive to follow this principle outside of work, as well, and I think the world would be a better place if more people did.

Human beings are emotional, egoful creatures, and it’s easy to let emotion and ego guide our behaviors. As a foundational aspect of Domino's culture, this principle of constructive criticism fuels our rapid pace of improvement while maintaining a highly collaborative atmosphere of mutual respect. Beyond that, I have found that being mindful of my intentions, has led to better interactions with others outside of work, and actually facilitates progress, rather than just venting negative energy into the world.

By Thomas Robinson, VP of Strategic Partnerships & Initiatives, Domino on May 28, 2020 in Product...

Data Science Literacy for the Enterprise