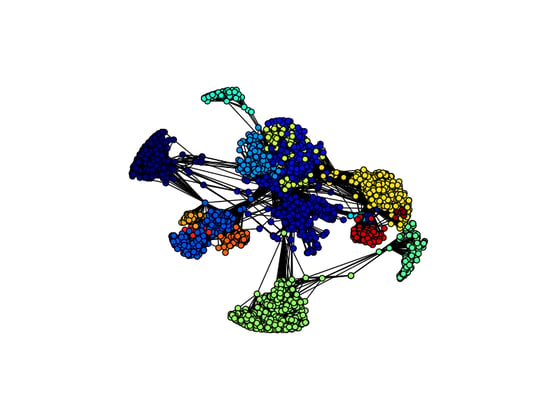 Many types of real-world problems involve dependencies between records in the data. For example, sociologist are eager to understand how people influence the behaviors of their peers; biologists wish to learn how proteins regulate the actions of other proteins. Problems involving dependencies can often be modeled as graphs, and scientists have developed methods for answering these questions called network analysis.

This post describes how to use the Python library NetworkX, to deal with network data and solve interesting problems in network analysis.

Before we dive into a real-world network analysis, let's first review what a graph is. A graph consists of a set of objects V called vertices and a set of edges E connecting pairs of vertices.

In the above picture, the circles represent the vertices and lines connecting the circles are edges. If this graph represented a social network, the circles would represent people, and an edge between two vertices could signify that those two individuals are friends.

We will look at a special type of network called an ego network. In an ego network, there is a "central" vertex or the ego vertex which the network revolves around.

Ego networks are important in sociology because they allow researchers to study the structure of an individual's relationships with respect to his world.

Getting started with NetworkX

Domino offers NetworkX as one of its default Python libraries, so all you have to do is import the library with the above statement.

Here's some basic information about the network dataset we will be working with:

As you can see this is a fairly connected network, and the number of edges in the network is more than 20x the number of nodes, so the network is densely clustered. If you examine the network, you will notice certain hubs of vertices appear. Hubs like these are an important feature of real-world social networks. Dense hubs represent high clustering and are often the result of underlying social mechanisms that are of interest to scientists.

How do we determine who is the most "important" individual in the network. Well, that depends on the definition of "important". One way to define "importance" is the individual's betweenness centrality. The betweenness centrality is a measure of how many shortest paths pass through a particular vertex. The more shortest paths that pass through the vertex, the more central the vertex is to the network.

Because the shortest path between any pair of vertices can be determined independently of any other pair of vertices, we can take advantage of Domino's multi-core hardware to compute the betweenness centrality of each vertex in the network using a parallelized algorithm.

First thing we need to do is partition the vertices of the network into n subsets where n is dependent on the number of processors we have access to. For example, if we use a machine with 32 cores, we partition the Facebook network in 32 chunks with each chunk containing 128 vertices.

Now, let's look at the vertices with the top 10 highest betweenness centrality measures in the network.

For those of you who use Facebook, your Facebook friends probably come from different aspects of your life: Some are your friends from college, others are your co-workers, and maybe some old friends from your hometown.

This library is easy to use and allows to perform community detection on an undirected graph in less than 3 lines of code!

That's all there is to it!

Graphs and networks are becoming more popular in data science everyday. Neo4j is a database that represents data as a graph, and topological data analysis algorithms and spectral clustering algorithms build upon graphs to identify flexible patterns and sub-structures in data.

You can use Domino  to run network algorithms on large hardware to speed up your calculations. Manojit is a Senior Data Scientist at Microsoft Research where he developed the FairLearn and work to understand data scientist face when applying fairness techniques to their day-to-day work. Previously, Manojit was at JPMorgan Chase on the Global Technology Infrastructure Applied AI team where he worked on explainability for anomaly detection models. Manojit is interested in using my data science skills to solve problems with high societal impact.